I have mixed feelings about this review and mostly because at the moment our meal isn't sitting well with either of us. It seems to be an apropos ending to a dining experience that did not start off well. Our favorite little Mexican spot recently underwent a renovation and a name change. The widely popular El Rodeo Restaurant at 4112 Pleasant Valley Road in Raleigh, NC has now transitioned to VIVA MEXICAN KITCHEN. We're told that it's the same family-owned business but with new, younger management. There is also a second location in Morrisville that has gotten rave reviews for the staff, the food, and the atmosphere.

El Rodeo was my favorite go-to spot for Mexican cuisine. And I always ordered the same thing - the vegetarian sincronizado. It was spinach, mushrooms, and cheese between two flour tortillas and it was so good! Whenever I wanted Mexican, I wanted that. The Big Guy was far more adventurous with the menu, trying everything from the tacos to the quesadillas. Also there were many times when he would try the chef's special of the day and we would both be pleasantly surprised.

The interior has undergone a renovation with a newly added bar, neon lights, and pink walls the color of Pepto Bismol. There's a lot going on but it has a happy, bubbly atmosphere conducive to multiple margaritas and a good time with friends. The MENU has been streamlined but we were assured the recipes were still the same. 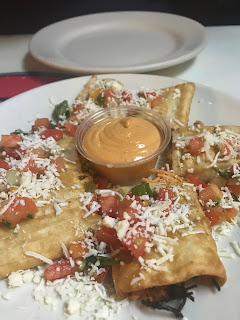 Previously, service was exceptional. Today, we were seated and then forgotten/ignored. Big Daddy pushed the timer as soon as we were shown to our table. It took less than a minute before a young woman dropped a bowl of nachos and salsa in front of us. She never spoke and barely smiled, moving so swiftly that she felt like an apparition. Ten minutes passed and a second table was seated on one side of us. At the fifteen minute mark a third table on the other side was seated. We then sat and watched as tables two and three were promptly greeted by waiters and their orders taken.

Now, usually at this point, we would have walked out, but it was my favorite little Mexican spot and I wasn't ready to give up on them. Thank goodness they had two Pokémon Stops to entertain us. At the twenty-two minute mark, a waiter noticed our scowls and asked if we'd been helped. When we told him no he became immediately apologetic and asked what we wanted to drink. Apparently there was a staff meeting of sorts and miscommunication between the host and the server. After ordering two sweet teas we asked to speak with the manager. Minutes later a message was relayed back that they would comp an appetizer and the manager would be with us shortly. Shortly happened as we were finishing up the meal we finally did order. 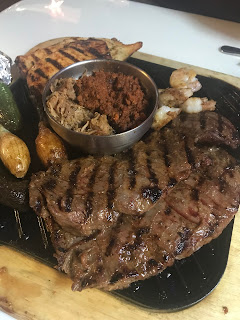 But let's talk about the food. By the time we ordered we had practically memorized the menu, having had enough time to study every item. My sincronizado was no longer available so I decided to give something else a try. We started with  CHICKEN ROLLS.  They were fried ﬂour tortillas filled with shredded chicken, pico de gallo, cheese,and  lettuce, served with a creamy chipotle dip. The chipotle dip was very nice! We really liked these and would definitely order then again.

Together, we decided to order the  PARRADILLA for Two. It was a meat lovers platter with chicken,
steak, carnitas, chorizo, shrimp, grilled vegetables, and onions, served with rice, beans, salsa and tortillas.We will never order this again. The steak was tough. The chicken was dry. The chorizo was laden with grease, and the vegetables were two roasted poblano peppers and three onions. It presented pretty on the plate and the shrimp were very good, but there's not much else that can be said about it. It's also sitting very heavy on our stomachs and two doses of antacid have yet to help. 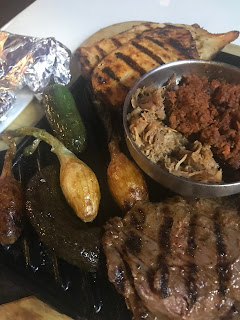 As we were finishing the meal the Managing Partner came to apologize for the snafu. He was extremely kind. He offered us dessert on the house, but we passed. At that point we had filled up on the really great iced tea and couldn't have eaten another bite if we wanted. 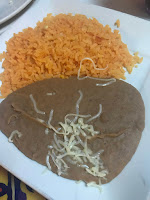 Now, we definitely
have to commend our server. His name was Alex/Alejandro and he went above and beyond to make up for the initial oversight. He was attentive and genuinely concerned about out enjoying our experience. We liked Alejandro!

I had one other issue that took away from the meal and it bothered me far more than it bothered my favorite guy. We were seated right below an open window space that bordered the lobby and reception desk. The constantly ringing phone and chatter from the staff was distracting and made holding a conversation difficult. The host and manager peeking through to observe the dining room was also a bit off-putting. On any other day it might not have bothered me, but on this day I was irritated by it.

Will we go back? Probably, but not with the same regularity.

Will it continue to be my favorite spot? Highly doubtful, but I never say never.

Do we recommend it? Ask for Alex and have  a drink. They have a great bar!

Posted by Deborah Mello at 1:57 AM 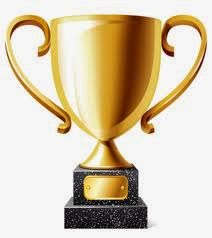